Why I am Blogging 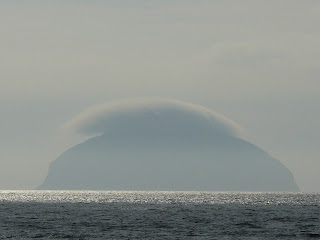 Growing up in southwest Scotland in the early 1980s, fear dominated my coming of political awareness as I stared out at the sea mountain that is Ailsa Craig.

There is a conversation with my father that sticks in my mind - you know, the typical father-son chat about George Orwell and his Stalinist vision of our future in Nineteen Eighty-Four, and whether we would soon be under permanent government surveillance.

“Ach, they've got bigger fish tae fry than you, son,” he would say.

That insidious feeling that I’m always being watched has stayed with me ever since. I now recognise it for what it was: a manufactured anxiety by the media. After all, Big Brother headlines sold newspapers. But the proliferation of cameras in all our major world cities since has done nothing to reassured me.

Around the same time I remember another cosy fireside chat about the Cold War, specifically on the likelihood of nuclear annihilation, especially considering the American nuclear subs parked up the road in Holy Loch, near Glasgow: prime targets in any nuclear exchange. It was a very real scenario. I clearly recall a Daily Record centre-spread that showed the probable thermonuclear blast zone and fallout area. Again, my father’s answer was the same dismissive optimism:

For reasons that still escape me, this struck him as something profound. To me it was self-evident, bordering on the bleeding obvious. What I didn't appreciate at the time was that this was my fathers's way of dealing with reality: his entire adult life had been spent in the shadow of the Cold War. It was now my generation's turn to come to terms with what it all meant.

In our new uni-polar world of economic summits and multilateral cooperation, it is easy to forget what it was like at that time. Personally, I went through a period of deep despair about my life which affected the life decisions I made, even whether it was worth making any plans at all. The fear of climate change does not even come close. I now realise it had an insidious effect on how I engaged with the world around me. Why bother to make the world a better place when it could all end in a mushroom cloud on the horizon, black rain, an endless nuclear winter, stillborn babies, mutant children and starvation? Eventually, I resigned myself to the same fatalistic attitude as my father. Why worry? You'll no ken ocht aboot it onyway.

That's why the 1990s were so remarkable for me. The perpetual fear of nuclear hell was OVER. Jesus Jones' song Right Here, Right Now captured the euphoria that our entire civilization was no longer on death row.


It's still one of my favourite songs. OK, the "watching the world wake up from history" bit was drawing a long bow but, still, a pretty good effort at capturing the Zeitgeist.

Then, as footage of Desert Storm, Bosnia, Rwanda & Somalia rolled before my eyes, it soon became clear that Mr. Jones had been guilty of premature extrapolation. The Cold War may indeed have been over, but as calendar followed calendar, three things became increasingly self-evident in the 1990s: first, history was not over. Second, small wars would now be much more visible. Third, they would involve civilians - not as incidental "collateral damage", but as often as the singular purpose of the war. A lot of civilians.

After a little research, a further shocking realisation dawned - that American intervention around the world was nothing new (please excuse my terrible naivety). With my eyes clear of Cold War mist, I was appalled to discover that America had been waging wars and staging coups for quite some time, often against elected democracies: Iran 1953, Guatemala '54, Chile '73 and El Salvador & Nicaragua in the 1980s, to name but a few.(1, 2)

It was a moment of profound revelation to me. I had picked up a love of history and America from my father. I still loved American culture, but what I had learned changed everything. I had that uneasy feeling that most of what I thought I knew about the world was completely wrong.

Having been an engineer, I realised I had to go back to first principles. So I took some time out to study history and set out to discover what the hell was going on. After a few years, I reached the point where I thought I understood it, where I felt I had achieved sufficient perspective to appreciate the grand scale of immense forces, all vying for supremacy: land hunger, population growth, nations, class, religion, ideology, gender, revolutions, capital, market forces, with great men and women occasionally leaving their mark. It all made a kind of sense. No one person or group was in charge, or at least not for long.

Or so I thought.

Then, a month ago, I had another epiphany.

I'd been reading what I could find about the credit crunch but even with my engineering, business and history knowledge I still could not grasp what was going on. With the world's financial system brought to its knees, wild global stock market and commodity fluctuations, international investment and retail banks erased from the landscape, the survivors refusing to lend to each other, money had ceased to have any meaning as hundreds of billions of dollars were thrown at banks to keep them afloat. Suddenly, all three of America's car companies looked like they might go to the wall, Britain was using anti-terrorism laws against Icelandic banks, there was a partial collapse of sterling(3), interest rates dropped to almost zero, millions were made unemployed, a global depression was supposedly on the way(4), and analysts were predicting that the US dollar would soon be replaced as the world's reserve currency:


Capitalism was on the canvas with the referee counting to ten, but was it 1929 again, or something new?

In my next post, I'll tell you what I found.

1. For an excellent study on how Churchill invited in the US to overthrow the democratically elected government of Persia in 1953 after the president announced that he wished to take control of Persia's oil revenues, see Stephen Kinzer, All the Shah's Men: an American coup and the roots of Middle East terror, John Wiley and Son, 2003

2. Kinzer covers the long history of US foreign interventions in Overthrow: America's Century of Regime Change from Hawaii to Iraq, Henry Holt and Co, 2007. John Pilger has a more recent treatment of the subject in a South American context in his excellent documentary The War on Democracy.

This has been my opening post, with the tone I'd like to maintain in my future posts. I shall make no claims without evidence.

Future postings shall (I hope) be briefer - if only because of time. It takes to gather quality footnotes. I only wanted to set the mood, as it were.

Newer Post Home
Subscribe to: Post Comments (Atom)
"All truth passes through three stages. First, it is ridiculed. Second, it is violently opposed. Third, it is accepted as being self-evident."
Arthur Schopenhauer
"What are the boasted advantages which my country reaps from a certain union?"
Robert Burns