Are Independence Polls to Be Believed? 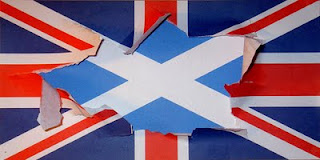 In my experience, many Scottish voters are incapable of arguing why they wish to remain British, except to say ‘I just am’: a sentiment I respect, even though I understand their British identity to be a construct.

Originally a compromise to persuade the Celtic fringes of these Isles that they were not being absorbed by England, (No, Britain would be something new, we were told) ‘I just am’ is a measure of the success of both direct and insidious programs of acculturation: of a constant reinforcement of British national identity via the media, newspapers, Battle of Britain movies, sporting events and air-shows on the one hand, and, on the darker side, of officially sanctioned sectarianism. And, it must be acknowledged, the result of so much Scots blood being shed for the British flag in two world wars. It’s not easy giving up a flag if someone in your family died for it.

This must be respected and will only be changed if the British identity becomes devalued, while at the same time the Scottish Government brand is demonstrated to be a viable, credible, inclusive alternative.
Whatever your identity, it must be acknowledged that this is happening.

‘I just am’ is certainly a better argument than any of the half-baked economic, historical or legal bullshit I hear from Unionist politicians and the media.

‘I just am’ explains why it is pointless to try to argue by reason or logic with relatives who are Scottish Unionists – it only ends in tears.

‘I just am’ also explains for me why the few Scots I know who wish to remain part of the UK – non-political types who hate/mistrust the SNP and Alex Salmond for whatever reason – wish to avoid a referendum at any cost: they know it might succeed. They understand perfectly that the avoidance of a referendum is undemocratic, but believe strongly that their fellow Scots are subject to a form of mass delusion from which they must be saved.

Which is why I don’t understand the oft-quoted disparity between those who desire independence and those who demand a referendum. These are the latest figures:

1. Those who really want Scottish independence – 38%

2. Those who really want a referendum on Scottish independence – 60%


So what on earth is going on?

If non-political, pro-UK Scots fear a referendum, how do we account for the more than 20% who want one but do not want independence? Is there a colony of deluded Wendy Alexanders out there I haven't met who want to 'bring it on' thinking they will easily win, or do nationalist-leaning Scots consciously change their answers when polled about their voting intentions?

The most dramatic example I know of this was the Hamas victory in 2006. The polls predicted a Fatah victory, but Hamas supporters had been primed to lie about their voting intentions to pollsters. Result: Hamas were returned as the legitimate government of the Palestinian people in an unforeseen and unopposed victory, and the Israelis and Americans were left stunned.

I am not saying this is happening in Scotland, only that there certainly is a tendency for unassertive Scots to deny they are nationalists, especially when asked by an English or a pro-UK Scottish friend, knowing that it causes friction. I know I used to do it. It’s similar to the tendency of Englishmen to watch their words when a Scot is in the room, saying ‘Britain’, ‘British’ and ‘the UK’, etc., when they really mean ‘England’ & ‘English’. (Don’t deny it!) It’s only natural. We watch our words to avoid controversy.

My question is, is this a factor in the disparity of the numbers above? Do some Scots instinctively play down their patriotism, so as not to offend their English/Unionist friends? Does this mentality spill over into polls on independence? Is Scottish nationalism much more popular than we are led to believe?

And, more importantly, is this what the UK authorities are afraid of?
(Many thanks to the Scottish Patient for the appropriated image!)

Posted by OutLander at 3:30 PM