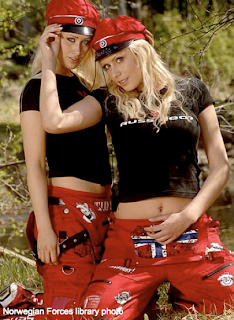 With every passing month it’s becoming ever clearer that Britain is stuffed. Radical solutions are called for.

We know that Norway’s Sovereign oil fund currently stands at £259,000,000,000 pounds, more than enough to cover both Britain’s £178 billion budget deficit AND the interest payments on the £1.5 trillion national debt.

Let’s look at the business case for invading Norway.

The UK could easily defeat Norway’s small navy and army (see photo above for what we are up against). It would keep the soldiers returning from Afghanistan busy. And it would stop Scottish nationalists bleating on about Norway being the country they most admire – after the annexation, Norway would then become part of Britain and the Scots can go there any time they like. We would then possess nearly all of the remaining North Sea oil reserves. If we dressed it up as a Union rather than an annexation, we could even adopt Norway’s membership of the EEA and the EFTA as its successor state, allowing the UK to fast-track its exit from the EU.

Of course, a pretext for war would be required, perhaps invoking anti-terrorism legislation, like we did for Iceland. But as the current Iraq Enquiry shows, coming up with elaborate excuses for war is still something we Brits do rather well and for which we can all still be justly proud.

Unthinkable isn’t it – one European country using another's oil-wealth to dig itself out of debt.

Of course, that would never happen.
Posted by OutLander at 1:20 PM

Can I offer my services to spear-head the invasion force?

Norwegians aren't noted for their humour. I think Scottish humour and beer would weaken the defences..

The Norwegian model is certainly worth a long and very hard look at from a Scottish perspective.

As for an invasion pretext: WMDs -weapons of mass distraction ;)

Regarding recruitment during the recession perhaps the Norwegian guard above should be in the recruitment posters.

I'm not a believer in naked aggression, but one must do one's duty for Blighty.

Free the Sanni from their oppression.

Payback for the Viking invasions? Raping and pillaging are justified.

Like your thinking re the Sanni pretext. Top marks.

Re the rape and pillage - bad idea. Intelligence reports confirm these Norwegian chicks are all six footers. They'll kick our asses.

If you want to go, that is.

Glad you like the blog. A gal called 'Quinie' put me on to yours. Makes me think about ranting less and thinking more! Great to see a fresh view of things.

I've linked today's Norway entry all over the net. It's, or at least I am, outstanding!

Mind you, nothing wrong with a good rant now and again.

Darien was never like this.
At this point in the war, we need a pointless act of self sacrifice. God I wish I was coming with you.

It would be pointless to throw away lives uselessly for no reason.

All the same, shame you'll miss the show, old boy.

just one little comment. although your plan is good, you are aware that the pic is of two high school girls in their graduation (one month)party uniform right?

come to think of it that propably doesn't dissuade the plans of invasion at all.

I got the business case from British Intelligence, after some guy called Blair had 'given it some polish' as he put it.

Are you telling me this is NOT what the Norwegian Army looks like? My God, we're going to get slaughtered.

Good post, but if your point is Britain is using Scotland’s oil to ‘dig itself out of debt.’ everyone seems to have missed it.

LOL...Brilliant post.
@Anonymous
"Good post, but if your point is Britain is using Scotland’s oil to ‘dig itself out of debt.’ everyone seems to have missed it."

No I think we certainly got that one.Satire being Scotlands favourite form of humour...We are watching a craftsman at work.

If I was to join the invasion ,what are my chances of getting captured by these Norweagan military types and being subjected to humiliating ,sexually oriented abuse?.......... just wondering, just in case ..you know ;-)

"what are my chances of getting captured by these Norweagan military types and being subjected to humiliating ,sexually oriented abuse?"

Anonymous,
Try to keep up.